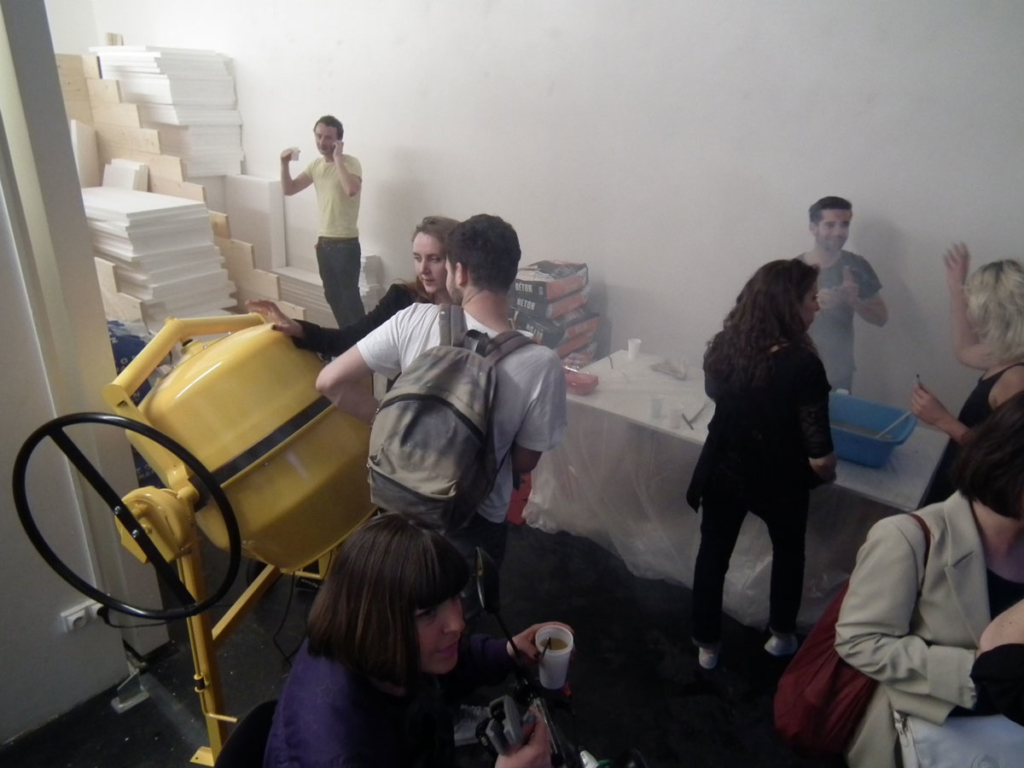 Exocene is a series of four meetings organised by EnsadLab Displays and the ICCA Labex, dedicated to new experimental contexts for art exhibitions. This third meeting focused on the experiences carried out by two collective structures, seeking to discuss their specific potentialities and problems.

The four Exocene meetings welcome those in charge of places and facilities that create unique conditions for experimentation for exhibitions. Sometimes – but not always – conducted in precarious economies, they are often characterised by relations that are very specific to their territories. Conceived as an alternative to institutional mechanisms that have sometimes become less effective in their context, aiming to leverage the invention of public art conditions and practices, do these frameworks renew the potential of the exhibitions they host? What is the specificity of the relationships they establish with their environments and the public? What obstacles do they face? How to develop counterspaces while fighting for their necessary recognition?

Organized at Ensad, this program is composed of 4 meetings bringing together two guests in dialogue with Displays research group and the public: Small is Powerful on October 18, with Juliette Fontaine (Capa Aubervilliers) and Julie Portier (La Salle de Bains, Lyon), Networked on November 14, with Lucie Orbie (50° North) and David Quilés Guilo (The Wrong Biennale), Playing Collective on November 29 with Clémence Agnez (Glassbox) and a member of the &Nbsp collective; (Clermont-Ferrand), The Big Scale on January 15, with Sylvie Boulanger (CNEAI) and a member of Lafayette Anticipations.

This meeting will aim to address the challenges and potentialities of collective and decentralised forms for the experimentation of exhibition, or collective experiences of imagining exhibitions.

La Tôlerie, a former garage renovated in 2003 at the initiative of the city of Clermont-Ferrand, has until now hosted curators in order to imagine and implement a contemporary art programme. Today, the city of Clermont-Ferrand has chosen to convoque three Clermont-Ferrand associations (Artistes en résidence, In Extenso and Les Ateliers) grouped into a fourth one : Non-breaking space (&nbsp). At the request of the municipality, Non-breaking space will design over the next three years a specific and original project for the contemporary art space La Tôlerie. The openings and social events will follow one another to the rhythm of the full moons. They will link invitations, collaborations, partnerships. The whole project  will be divided into three phases, three seasons that articulate and dialogue three components of this space: light, floor, walls, making the space itself the main subject. Sections of different natures will also mark another temporality, merging various registers of activities, as well as several narrative forms.

Glassbox is a non-profit association that aims to promote emerging contemporary art creation. Leading by artists who manage the parisien venue at 4 rue Moret, it allows young creators to access specific forms of visibility and propose hybrid formats for the production and dissemination of contemporary art. Committed to making emerging creation visible, the Glassbox team is itself composed of young artists. It has constantly changed throughout its fifteen years of activity, in order to remain as close as possible to the networks of young art school graduates, but also to enable its members, once they have become more experienced, to devote themselves fully to their personal endeavours. The starting office had names such as Yann Kopp or Stéphane Doré, then the association’s ranks were held by Elfie Turpin, Nicolas Tilly, Nicolas Julliard, Oriol Nogues, the 1.0.3. collective, Sabrina Issa, Stéphane Despax, Emilie Schalck, among others. The current team is composed of Clémence Agnez, Margaux Estivill, Alisson Haguenier and Adrienne Louves accompanied by guests and collaborators.